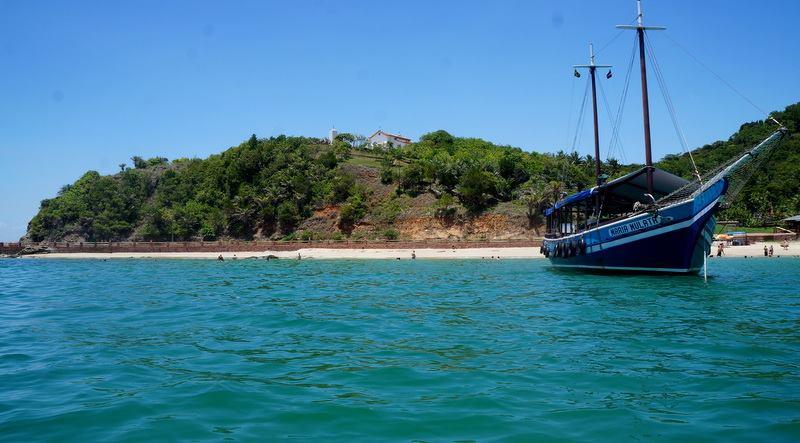 TOUR BAY OF ALL SAINTS

TOUR BAY OF ALL SAINTS

How about sailing in the wide, clear and calm waters of Kirimurę, the "great inland sea". In these waters, 56 islands are located, forming the largest bay of the Brazilian coast: the Bay of All Saints. The Bay of All Saints is a setting that holds secrets and many interesting stories, so the only difficult mission here is to choose the most beautiful of the islands.

The Bay has an area of ​​approximately 800 km ˛ of extension by the continent and 300km ˛ of coastal contour. It has this name because it was first sighted by the Portuguese on November 1, 1501, the day of all saints. The Bay of All Saints went to the source of inspiration to name the state of Bahia.

A sea of ​​calm and crystalline waters, surrounded by the Atlantic Forest on the continental side and by a succession of mangroves, restingas and coral reefs on the ocean side. It is in the warm waters of the coast of the Bay that the humpback whales reproduce. Due to its importance, it was declared the headquarters of the Blue Amazon, with the purpose of establishing a world-wide framework of debates on the economy of the sea, naval intelligence and productive chain.

The islands reveal churches, such as that of Itaparica, founder of the Catholic religious matrix in Brazil, or the Church of Our Lady of Loreto, symbol of the work of the Jesuits, responsible for the process of indigenous catechesis. It is also possible to appreciate architectural, landscape, historical, natural and cultural heritage. The bay reveals a generosity, translated in the abundant fishery that sustains the riverside ones; in the faith that infects those who visit it; and in the overflowing joy of her majestic beauty.

To enjoy this immensity of beauty, it is possible for the connoisseur to know the main itineraries indicated for a boat trip or schooner, and to allow to navigate in this adventure of living remarkable and unforgettable moments. The most accessible itineraries are the visits to the islands of Itaparica, Ilha de Maré and Ilha dos Frades, leaving Salvador. Also in Salvador is possible to glimpse a beautiful partial view of the city, the Fort of Săo Marcelo, Port of the city, Península de Itapagipe, Church of Bonfim, Fort and Church of Mount Serrat and Ponta do Humaitá.

(by Google translator)
The Island of Itaparica, or "Around Rocks" is the largest of all the islands of the Bay of All Saints. The name given by the Tumbinambás Indians, the first inhabitants of the island, is justified by the formation of reef in Ponta de Areia and the east coast of the island, which is formed by the beautiful and tranquil beaches of Barra Grande, Aratuba and Berlique, extending until the southern end of the island, arriving at the beach of Box Prego, a quiet and cozy village. Itaparica offers good infrastructure of tourist services, the island receives visitors from the four corners of the world.

The island is divided into two municipalities: the small town of Itaparica, which retains most of the place's history; in it is the Fort of Săo Lourenço, which was fundamental in the struggle for the independence of Brazil; and the picturesque Fonte da Bica; or "fountain of youth", built in 1942. It is said that there is a belief that the fountain makes old girl turn. It will be? It does not cost anything to check it out! And Vera Cruz, whose headquarters is Mar Grande. The city is bigger and more urbanized, having several services. An interesting tip for the visitor is to take a short walk to visit the house of Joăo Ubaldo Ribeiro, on the edge of Ponta de Areia beach; and the summer house of Vinícius de Moraes on the island.

The island of Maré, which is the perfect place to relax, to integrate with the sea, also offers hotel services and options for bars and restaurants.

And the enchanting "star island", the Isle of the Friars, which is formed by a territory of 15 tips, which looks like a star. In it visitors usually arrive along the beach of Our Lady of Guadalupe, and soon they see in the top of the hill the Church of Guadalupe, which was built in the seventeenth century. The church of Our Lady of Loreto, located on Ponta do Loreto, was built between 1640 and 1645. The church is in a small cove, by the sea, one of the most beautiful places on the island.

The Isle of the Friars is also one of the most important from the landscape point of view. Owner of lush Atlantic forest, countless native trees, including Brazil wood. Everywhere there are historical vestiges of the Jesuits, who owned the island. A curiosity is that the name of the Island was inspired by the group of religious, who survived a shipwreck, and found shelter on the island. Frades is the most primitive of the tourist route, and offers only bars that are on the beach of Nossa Senhora. To the path-seekers, there is an intriguing road map to know and appreciate without moderation its immensity and fascination.

For you who liked this super tour tip, come and carry out the tour around the Bay of All Saints.

We offer the itinerary Ilha dos Frades to Ponta de Areia beach on Itaparica Island. The tour departs every day at 09:00, returning at 17:30. During the tour you have live sound of local musicians and fruit rodizio. We stay approximately 2pm on each island so you can enjoy the place and enjoy the local cuisine.